The Border Guard unit stationed at the Katowice-Pyrzowice airport received an example of the PIAP GRYF bomb disposal robot in its latest configuration.

The latest model of the medium-weight (48 kg) EOD robot has been received by the Special Intervention Group of the Border Guard. The equipment was procured with the use of the Silesian Voivodeship funds. The administrative unit in question remains responsible for maintaining the aviation border crossing points within the Voivodeship so that they make it possible to conduct effective and efficient EOD procedures.

The Border Guard also received a vehicle tailored to carry and store specialist EOD equipment, an EOD shield for protecting the EOD technicians from overpressure and fragmentation caused by the explosion of the explosive ordnance, and a heavy EOD suit protecting the EOD personnel in combat operations. The equipment handed off has a value exceeding PLN 1.9 million.

The Special Intervention unit officers working at the Katowice-Pyrzowice airport, as well as the K9 unit specializing in explosives/weapons search, carry out EOD missions. This includes providing security measures for high-risk flights and regular passengers. The equipment received by the Katowice airport Border Guard unit will “certainly make it easier for the officers to work, and primarily, it would enhance passenger safety”.

Noteworthy, the Border Guard’s Special Intervention Groups (Zespół Interwencji Specjalnych SG) are viewed as specialized threat response teams taking care of security at international airports, who can autonomously conduct a variety of operations at the airports, ranging from EOD, through arrests, and neutralization of explosive devices.

The PIAP GRYF robot delivered to Katowice (the digital one), is currently the most advanced variant of this popular Łukasiewicz – PIAP design. Notably, Gryf is being used by numerous units domestically, and abroad. The group of foreign customers is quite broad, and it includes Indonesia, Nigeria, Senegal, South Korea, and Romania. 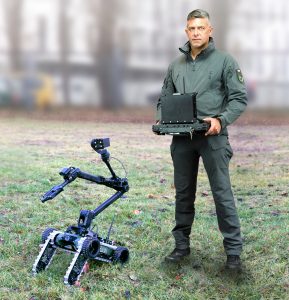 The PIAP GRYF bomb disposal robot is tailored to carry out hazardous materials neutralization tasks, explosive ordnance disposal included. The ugv can be employed to safely identify, pick up, and transport suspicious objects, to the location where they could be safely neutralized. In extreme scenarios, the neutralization could take place in locations where the hazardous materials are discovered – in circumstances as such, the robot’s accessories can be used.

The hybrid drive system makes it possible for the robot to move efficiently on any surface, in rough terrain, and in buildings (moving up and down the staircases). The robot’s wheels can be removed which further reduces its size, and thereby makes it possible to carry out operations in narrow spaces – inside an airliner for instance.

The mobile robot has been equipped with IR cameras for day/night use, a Hi-res camera with a 33x optical zoom, and a gripper camera that makes it far easier to pick up hazardous materials. The robot is remotely controlled via a modern and handy control panel. A trained officer can assess the content of suspicious luggage or object, and inspect other potentially dangerous goods.

This website uses cookies to improve your experience while you navigate through the website. Out of these, the cookies that are categorized as necessary are stored on your browser as they are essential for the working of basic functionalities of the website. We also use third-party cookies that help us analyze and understand how you use this website. These cookies will be stored in your browser only with your consent. You also have the option to opt-out of these cookies. But opting out of some of these cookies may affect your browsing experience.
Necessary Always Enabled
Necessary cookies are absolutely essential for the website to function properly. This category only includes cookies that ensures basic functionalities and security features of the website. These cookies do not store any personal information.
Non-necessary
Any cookies that may not be particularly necessary for the website to function and is used specifically to collect user personal data via analytics, ads, other embedded contents are termed as non-necessary cookies. It is mandatory to procure user consent prior to running these cookies on your website.
SAVE & ACCEPT